Do your answers get you in trouble? 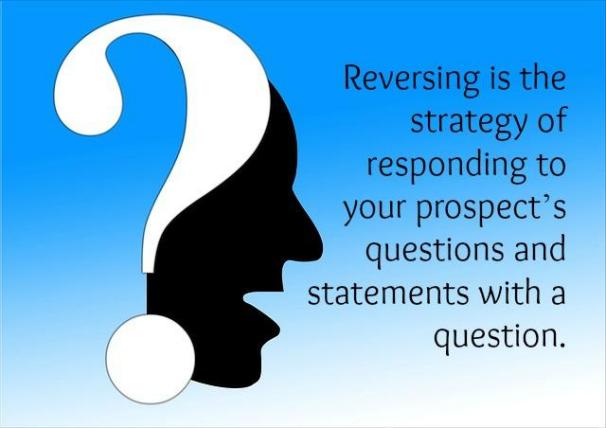 One way salespeople get themselves in trouble is by rushing to answer a prospect’s question … before they uncover the intent that’s driving that question. The question you hear is probably not the “real” question, and the intent behind that question is far more important than the surface meaning of the words.

Perhaps this has happened to you: You had what seemed like a great first conversation with a prospect. During that conversation, you answered all the prospect’s questions at length. Then, when you circled back a week or so later for the second conversation, you felt like you were somehow out of sync. Momentum stalled. Eventually, you lost the deal … and the worst part was, you weren’t even sure why! Most likely, that happened because you failed to confirm the intent behind the prospect’s questions and statements. You simply answered the question.

Consider the following exchange, which is how most salespeople respond to a question from a prospect:

PROSPECT: Have you got a lot of experience working in our industry?

YOU: Yes. We’ve worked with lots of people in your industry, including ….

So: Why is this issue important enough for the prospect to raise it with you during the meeting? As it stands, you have no idea. Don’t guess! You need clarity and certainty about the prospect’s motives.  Giving any direct answer to the prospect’s question won’t give you that kind of clarity. That’s why the sale stalled. You didn’t know what the real issues were!

To avoid running into that problem again, here’s a technique that will make it easier for you to uncover the real issues: Reversing.

Reversing is the strategy of responding to your prospect’s questions and statements with a question.  It puts the verbal “ball” back in the prospect’s court.  Reversing questions are important selling tools, particularly early on in the relationship.  They keep you from falling into the trap of attempting to read the prospect’s mind.

Suppose, when you heard that query about industry experience, you said this instead:

YOU: That’s an excellent question. You’re asking it because…?

Reversing can add clarity and completeness to the prospect’s inevitable “smoke-screen” questions and statements. They help you to uncover the underlying intent. Some other Reversing questions include:

Of course, reverses must be used with care and diplomacy. Firing back instantly with knee-jerk questions in response to the prospect’s questions may come off as harsh.  If the prospect asks, “How are you today?” the best response is not, “What are you really asking?”

In addition to choosing the right spots to use a reversing strategy, you will want to practice preceding your questions with softening statements.

Be prepared to pose multiple reverses – tactfully. It often takes more than one reverse to uncover the prospect’s real question because defenses are usually set quite high at the beginning of any relationship between buyer and seller. Your job is to lower those defenses! Reverses can help you do that when they’re used properly.

Here’s the effect of multiple reverses on the prospect:

Your first reversing question (for instance, “That’s an excellent question. You’re asking it because…?”) will elicit an intellectual, “safe” response. (“Well, because we are only interested in working with people who have significant experience within our industry.”)

Your second question (“I see. That makes sense. Can I ask why that’s a priority for you?”) will also elicit an intellectual, “safe” response. (“We talk to a lot of consultants, and we find that not all of them know our industry inside and out.”)

Your third tactful reverse (“Good point. And it’s important that they know the industry inside and out because…?”) will likely penetrate the applicant’s natural defense system—and increase your chances of getting an emotional, “true” response. (“I want someone who can hit the ground running.  I don’t want to subsidize anyone’s learning curve.”)

Be prepared to explore the same issue with at least three different perspectives/phrasings …  since you’re unlikely to get good results from simply using the same reversing question three times in a row!

Reversing takes a little practice. Once you master this technique, though, you’ll find that posing reverses allows you to gain invaluable insights about what’s really going on in this person’s world. If you do practice the Reversing strategy, and then use it consistently, you’ll never again find yourself standing in the parking lot after a second meeting, wondering what made your prospect decide to lean in another direction.