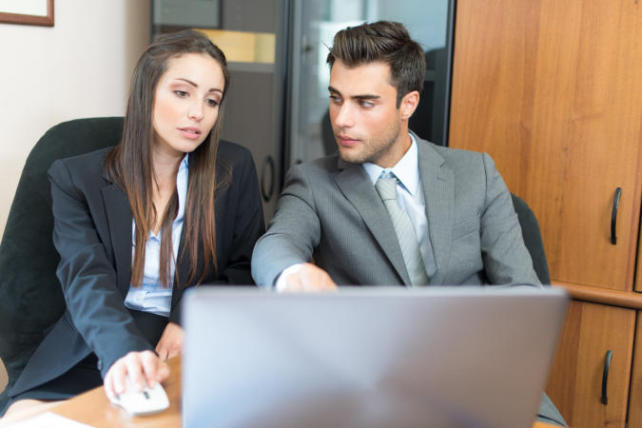 Rosita had been behind quota before, but never by this much and never for this long. When her manager, Sam, offered to take her out to lunch, she figured she was either looking at very good news … or very bad news.

“There’s no easy way to say this first part,” Sam said quietly once they were seated at their table, “so I’ll just say it. You’re on probation. You’ve got sixty days to turn things around or we’re letting you go.”

Bad news. Rosita took a deep breath, nodded, and then asked: “OK. Is there a second part?”

“There is,” Sam said, smiling. “Fortunately, it’s a lot easier to talk about. I don’t think any of this is your fault.”

Rosita had no words for a reply. She hadn’t seen that one coming.

“I’m convinced you’re the right person, Rosita,” Sam went on, “in the right job, selling the right product. But I’m also convinced we didn’t give you the right tools. I asked you to come here today because I am personally committed to helping you meet your quarterly target and get off probation. Once you’ve done that, I think you can demolish your annual quota and earn more here this year than you’ve ever earned before. That’s what I believe, and it’s why I booked us this table for the next ninety minutes. I want to help you build a plan for doing all that. Are you in?”

Could this really be … good news? More than a little taken aback, Rosita sipped her water, put down the glass, looked Sam in the eye and said, “OK. Let’s work on the plan.”

Sam’s smile grew wider. What he said over the next ten minutes surprised Rosita.

First, Sam told her she should know she wasn’t the only person on the team in trouble. Second, Sam wanted her to know that the reason so many people on the team were in trouble was that they’d all been encouraged to spend their working days doing the wrong stuff: prove how busy they were; create instant quotes for everyone who asked for one; and treat every interaction with a prospect as though it were a sale waiting to happen. Third, and most surprisingly, Sam said he wanted to change everyone’s job description.

“The whole team,” Sam said, “has been acting like the unwritten job description is to be able to prove to me that whoever we’re talking to really is qualified and about to buy, always. That’s delusional, but it was my behavior that led you all to believe that was your job. That changes now. Starting today, I want you to turn that job description upside down. I want you to start going for the ‘no.’ I want you to start asking questions that will make it obvious to all of us who’s disqualified to buy.

“Really,” Sam said. “As of today, you and I are in the reality business. We want to know what’s really going on in every discussion. No exceptions. That means I want you to start asking a whole different set of questions before you agree to write up a quote for anyone. OK?”

“Yes. I also want twenty prospects per day disqualified. I want you to spend ten minutes or so sharing that list of disqualified prospects with me at the end of every day … along with your analysis of why each person isn’t going to buy.”

“Let me get this straight,” Rosita said. “You want a list of the people who said ‘no’ to me during the day? And, you want to know why I think they’re not qualified?”

“That’s it,” Sam said. And with that, he started talking in detail about the kinds of questions he had in mind and the situations where he wanted Rosita to use those questions.

Rosita pulled out her smartphone and started to take notes. Here’s some of what she wrote:

What the prospect says: “Hmm, that sounds interesting. Send me a brochure and call me back sometime next week, OK?”

What the prospect may mean: “I really don’t have time for this right now, but I don’t want to sound rude, so I’m pretending I need to see a brochure. I will dodge you if you call back next week.”

What the prospect says: “Let me take a look at a quote, and I’ll think about it.”

What the prospect may mean: “No thanks, but I’d like to use your pricing for a month or so to put the fear of God into my other suppliers.

What I could ask to figure out what’s really going on: “Can we agree to set up a timeframe for you to make a decision if I were to send you a quote, Tom? If it’s a ’no,’ that’s perfectly OK, I promise. Or, is this your way of saying, ’No thanks, this time around’?”

What the prospect says: “You can send the quote to me. I’m the decision maker.”

What the prospect may mean: “I’m not the decision maker.”

What I could ask to figure out what’s really going on: “Of course, but when decisions like this typically get made for this kind of service at this kind of money, there’s almost always a few others involved, too. I’m curious. Once you’ve given it the green light, who else typically sees it, too, for final rubber-stamping?”

Rosita followed Sam’s lead. She changed the dynamic of her discussions with prospects. She started going for the “no,” and at the end of every working day, she shared with Sam her list of (at least) twenty people she’d disqualified. She generated far fewer quotes, but when she did generate a quote, she knew she was on the same page with the prospect. She stopped chasing people who were unwilling or unable to buy, and she spent far more time in conversations with people who were interested in doing business with her.

Within just thirty days, Rosita was off probation. She finished the year with her best annual total ever.

The moral: Disqualify, disqualify, disqualify! Be politely skeptical about what you hear from prospects. Ask questions that help you get a better idea of what’s really going on. Go for the “no”! And, once you do get a “no” answer … move on to a new opportunity.

Sandler Training professionals share insights and tips on current sales, sales management, leadership and management topics. We invite you to comment on our posts and to pass them on to your colleagues.
Share this article: